Research Article Title: G-quadruplex structures within the 3’ UTR of LINE-1 elements stimulate retrotransposition. Journal: Nature Str. Mol. Biol., 2017, aop. http://dx.doi.org/10.1038/nsmb.3367 Simple Short Explanation of the Work for Everyone:    Approximately half of our genome is originated from mobile DNA elements, which are DNA segments that insert themselves at different positions in a “host” genome they infiltrate. Some mobile DNA elements increase their genomic copy numbers via a copy-and-paste mechanism, extending the length of our genome in an evolutionary timescale. In this study, we present an evidence that a specific guanine(G)-reach region in LINE-1 retrotransposons, type of mobile DNA elements that played a significant role in shaping mammalian genome architecture, has functional role in LINE-1 mobility.    By a thorough dusting of the low-complexity G-rich regions in ancient LINE-1 remnants, dead at different time epochs, we revealed the original G-rich seque
Post a comment
Read more 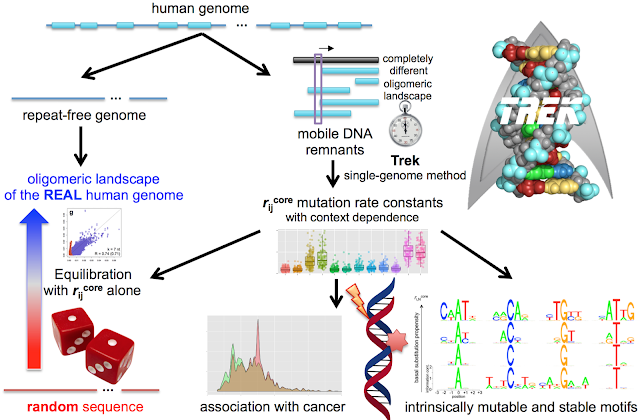 Research Article Title: Single genome retrieval of context-dependent variability in mutation rates for human germline. Journal: BMC Genomics, 2017, 18, 81. http://bmcgenomics.biomedcentral.com/articles/10.1186/s12864-016-3440-5 (first deposited in bioRxiv on 10 August 2015) Simple Short Explanation of the Work for Everyone:    Our genome is a very long DNA strand holding a sequence of nucleobases. Those nucleobases are of four types - letters A, T, G and C - and there are ~3.5 billion such letters in our genome. However, the letters do not stay the same over evolutionary timescale (millions to billions of years), and very slowly change/swap (or, as we call it, mutate) in our genome, driving the evolution of life. The work presents a technique to retrieve the speed with which those letters change/swap by accounting the full extent on how the neighbouring letters tune the speed. We use only a single genome, rather than requiring thousands of genomes as needed for such an undert
Post a comment
Read more

Exactly a year ago, I wrote my first annual review set (29 th of December, 2015, link ) for the twelve books that I read within the frames of the Goodreads reading challenge. Now, the 2016 aims are met too, and below you can find my spoiler-free brief impressions and recommendations (out of 5 stars) for the books read throughout the soon-to-be-the-past year (2016). Looking forward to where I will be taken in 2017! T he Organized Mind: Thinking Straight in the Age of Information Overload by Daniel J. Levitin . Hard to describe or recommend such type of (self-improvement) books, since the level of usefulness is expected to be really dependent on what the reader looks for. For me, this book was exciting 1%, interesting 5%, fine 10%, and trivial 84% of time. Particularly interesting were the neuroscientific justifications behind some complex habits that are apparently hardwired and fixated in us through evolution. ( ★★ )   T au Zero by Poul Anderson . The cu
Post a comment
Read more

A year ago, I started a Goodreads challenge of reading 12 books throughout the year. Unfortunately, with the current workload and commitments, even 12 was a stretch, but the 2015 target has been met, though with a tweak as you will see at the end of this “report”. Below you can find my spoiler-free impressions and recommendations (out of 5 maximum stars) for the books read in 2015. Looking forward to where I will be taken in 2016 through the awesome books I have selected for the year! T he Epigenetics Revolution: How Modern Biology is Rewriting our Understanding of Genetics, Disease and Inheritance by Nessa Carey . A necessary bird’s-eye view on the recently emerged/reinstated branch of science. The book digests and overviews the most important discoveries done in the area during the past 20 years, and, along with the references, would satisfy even the acting professionals in the field. Epigenetics develops at an incredible pace now, hence I would not recommend this
Post a comment
Read more

December 11, 2015
Converting a Subfolder of a Git Repository into a Separate Repository with Preserved History While a git-tracked project grows, it is commonplace to separate project parts as individual projects, still controlled by git with additionally preserved prior history related to the content of the separated folder. Such separation is very useful if you, like me, keep a single closed git repository at GitHub with all the draft projects inside, once in a while opening the ones that you consider to be ready for a public release. Below is the step-by-step guide on how to extract a subfolder into a separate distinct git project. For the examples below, the bigger project will be called PARENT, situated in a folder PARENT that is git-tracked and pushed into GitHub with the following address: https://github.com/USERNAME/PARENT.git . The subproject to be separated will be called OFFSPRING, situated in the subfolder PARENT/OFFSPRING, to be pushed into a new GitHu
Post a comment
Read more
More posts